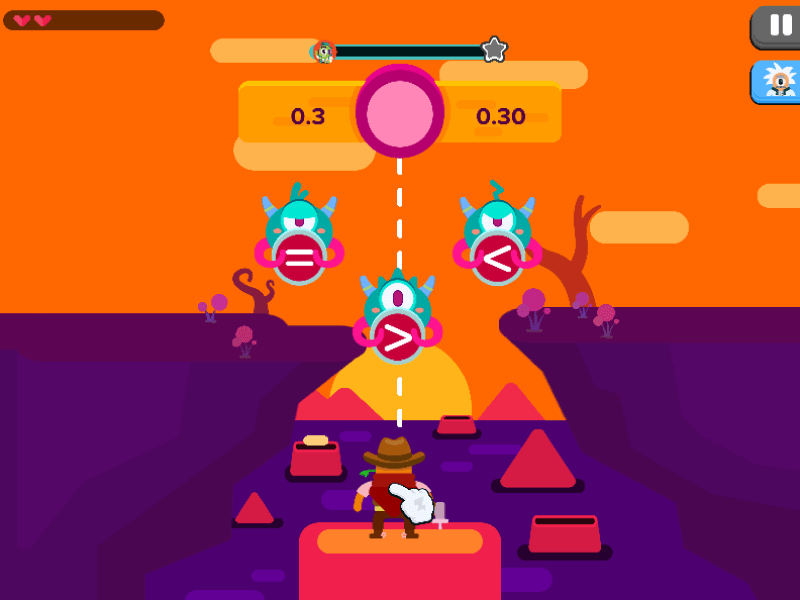 Some really nasty outlaws are playing decimal games invading a small country town located in the outskirts of Zapzapmath. These criminals emerged from one of the many black holes surrounding the ecosystem. They ambush the town in search of mathematical formulas to steal, top secret equations to reveal, and decimals to misdeal. Yes, you read right. They want to wreak havoc on the decimal numerical system!

The local sheriff has called you in for a favor: remove these outlaws and have them banished from the Zapzapmath ecosystem forever! Instead of resolving to violence and anger, you try to reason with these law-breaking, unwanted guests. You attempt to have a friendly conversation with them, but they laugh at you. You give them a stern warning, but they proceed to steal your cowboy hat. You tell them that this is the last straw, but they take that straw and order a milkshake to share in fractions.

In the end, you decide that an old fashioned shootout is the best and most efficient way to run these outlaws out of town. You tell them to meet you at sunrise, and they agree.

The next morning, you meet the outlaws equipped with a stun gun. You do not want to harm the outlaws. Instead, you just want to scare them out of town. However, the outlaws have prepared shields to protect themselves with.

Each shield is labeled with a <, >, or = symbol. In order to shoot the outlaws and stun them with fear, you need to study the decimals provided, and compare which is bigger, smaller, or equivalent in value. Tap and shoot when the correct answer aligns with the center mark. If you pick the right shield to shoot, the outlaws will panic and the entire group will fly away. If you pick the wrong shield to shoot, the outlaws will gang up and attack you!

One of our many decimal games, Decimal Shootout is a fun and interesting game that develops your knowledge and comprehension of decimals. Unlike the rest of the decimal games, the gameplay is a simple point and shoot, but the test of comparing two decimals of very similar values brings a challenge to the game that is as exciting as it is engaging.

In this unit of inquiry, you will learn to analyze the relationship from fractions to decimals by evaluating decimal comparisons that combine fractions and word descriptions. This changes up the pattern of the game every so often, allowing your alertness skills to come into play. The method of comparison also reminds you to re-establish prior practices regarding fraction and decimal identities you have learned from past decimal games. Consistent practice of decimals through games will enrich your knowledge of conquering decimals like a sharpshooter stating a point.

This game equates wrong from right!